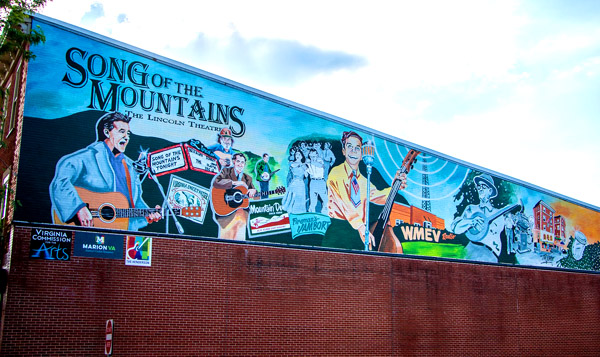 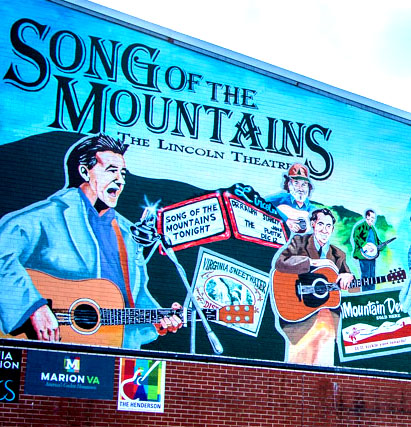 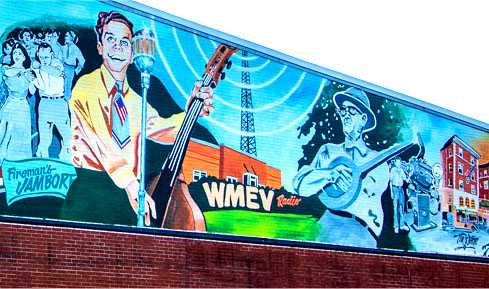 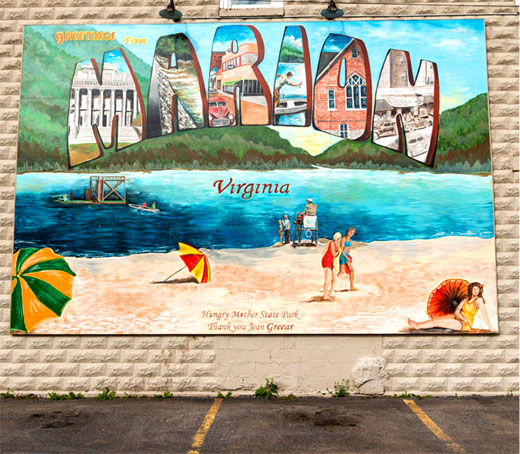 Mural Mention#1 "Giant Welcome to Marion" postcard, featuring a stylized postcard mural with local scenes. The post card mural was designed by Suzanne Sukle based on ideas presented by the owner of the building and the enlarged pattern printed out by her. Holly Thomas primed and painted the mural onto the panels from Suzanne's pattern.
Location: 232 East Main
Designed by: Suzanne Sukle
Artist: Holly Thomas 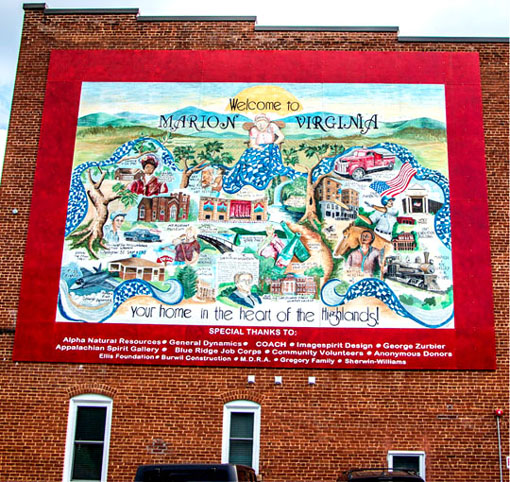 Mural Mention#2 The "Patchwork of Marion", our first mural and features stories of our community's history woven into a quilt design. The quilt mural was designed by Holly but primed and painted by a community of volunteers that she organized. Many people worked on it and Holly would be the first to tell you that.

Jim Thomas, her husband, with help from Mike Orr, devised a unique system to put the panels on the side of the building without damaging the brick. It was determined that if primed and painted directly on the brick, the mural would cause sweating on the inside and damaging the inside brick. The panels had to be put on the exterior wall leaving an airspace between the brick wall and the murals to allow the building to breathe. A photo was taken of the Herb House brick wall and enlarged to actual size. A pattern of the brick and mortar was made and each panel in the mural treated to look like brick. Each panel was then sealed and the mural painted overtop. This also allowed a safe environment for the painting volunteers as the work could be done on a flat surface and no one had to get up on the scaffolding, a real safety measure. A similar technique was used on the post card mural but without the texture. The position of filled in doors and windows on the side of the concrete block wall covered by the mural did not allow for painting directly on the wall without distorting the picture. This mural was also painted on a flat surface at the Herb House and installed by Jim Thomas on the wall. A lot of research, study, and engineering went into the Herb House mural and the lessons learned there applied to the postcard mural. This was a groundbreaking technique not done elsewhere.
Location: 107 Pendleton Street
Designed by: Holly Thomas
Artists: Community of Volunteers 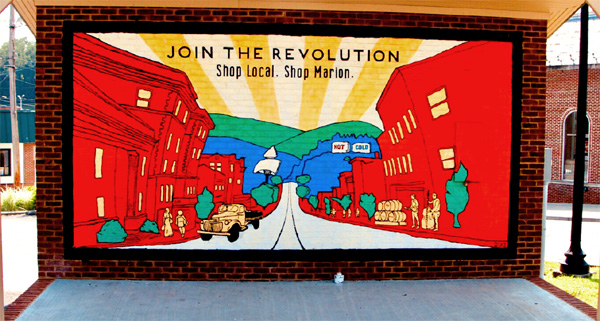 Mural Mention#3 - "The Revolution" Marion began a new chapter following The Great Recession, with a huge initiative to "Shop Local" as one strategy to rebuild the town's economy and restore community pride. Aaron Barr, a Marion native living in NYC, offered his services and one Thanksgiving weekend, came home to kick start "The Marion Revolution". The popular image has been used on posters, stickers and more, featuring iconic images of this SWVA town.
Location: Corner of Chestnut and Cherry Streets
Artist: Aaron Lloyd Barr 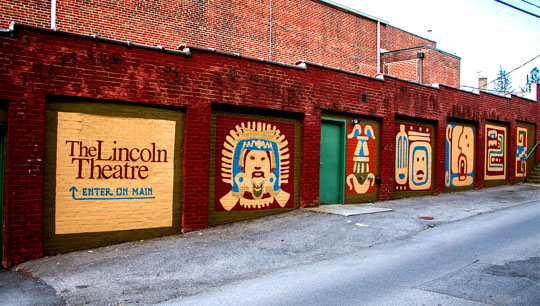 Mural Mention#4 - "Mayan Mural" The "Mayan Mural", on the rear wall of the Lincoln Theatre, represents a series of Mayan themed glyphs from the unique interior design of this restored 1929 treasure. Artist and design was Kristin Untiedt-Barnett, following the theatre design of the original Mayan Revival scenery from Novelty Studios of New York.
Location: 117 East Main(rear alley)
Artist: Kristin Untiedt-Barnett

Tim was born and raised in Roanoke, Virginia to parents Robert and Jackie White. He left Roanoke, Virginia in 1974 and settled in east Tennessee, where he pursued his careers of artist, sign painter and banjo picker. Though the artist was there from the start and the sign painter was a logical career outgrowth, the banjo picker was learned later in life. As he said one time, "It's amazing what one can learn when they don't watch TV." Artist Tim White is also host of "Song of the Mountains", and was the artist for the Bristol Sessions mural in nearby Bristol Tennessee.

Tim's interest in the musical heritage of the region, a region which stretched from Roanoke to Knoxville and cut a broad swath into neighboring states, led to his painting a mural on State Street in Bristol in 1986. This mural depicts the principal characters of the historic Bristol Sessions, which took place in Bristol, TN-VA in the summer of 1927.

As a public figure, artist, musician and radio announcer, Tim White has unselfishly contributed time, effort and energy to support and promote the music and the musicians of the region. Tim has been in radio since 1990. He has a syndicated radio program featuring bluegrass music, old time music and comedy which airs in the U.S. and streams on the internet via many of his affiliates. He has one of the most popular Bluegrass radio programs in the Birthplace of Country Music Region "The Bluegrass Show" on WAXM (FM 93.5). He is on every Saturday from 9 am 'till 12 pm. He has a full slate of sponsors who support his program. To quote Tim, he says, "I'm truly a blessed man".

Aaron Lloyd Barr is an artist, musician, and agent at Bernstein & Andriulli, a premier creative management agency based in New York City.

At his day job, Aaron's primary focus is managing and building the careers of artists which includes creating meaningful and impactful collaborations with his artists and select clients. Artists on his roster include Tristan Eaton, Josh Cochran, Stanley Chow, Shotopop, and Brendan Monroe to name a few. He's worked on collaborations and projects with clients such as Converse, Apple, Deloitte, and Hublot.

As an artist, he continues to experiment with mediums of the visual nature as well as in the music space where he writes and performs under the moniker Del Caesar. Before pursuing life in the arts, Aaron proudly grew up in the beautiful mountains of southwest Virginia where his family still reside. There, he developed a love for the outdoors and continues to sneak away on weekends for trips outside the city to fly fish. He currently lives in Brooklyn with his lovely wife and beautiful baby daughter.