Featured Mural - Animal Discovery Den An impressive full wall mural in the Animal Discovery Den includes a variety of animals on a backdrop of where they may be found in the Park. Murals that show a variety of features are painted on all of the restroom walls and doors within the Park. Guests are delighted to find this special surprise and even ask if we have postcards of our rest rooms! You'll want to look closely to see the many animals the artist has cleverly weaved into his work. Amy Wald, Chimney Rock resident and artist, has painted murals of old postcards on buildings in Chimney Rock Village. You can't miss them as you stroll through the area.

Mural Mention#1 Ladies Restroom at the Discovery Level gives the feeling of being outside in the bathroom here at Chimney Rock State Park with these beautiful murals.

Mural Mention#2 Mens Restroom at the Discovery Level is also interesting experience and you get the feeling of being surrounded with nature in all directions.

Mural Mention#3 The Sky Lounge Restrooms are on the same level with the Gift Shop and the feeling of being in the expansiveness of total nature is over powering to say the least. Even the ceilings become part of the overall illusions of being one with the great outdoors. 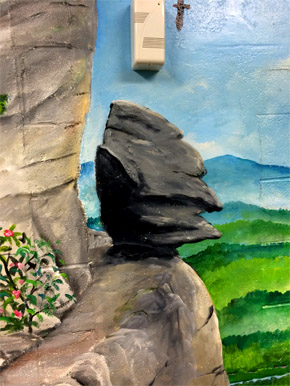 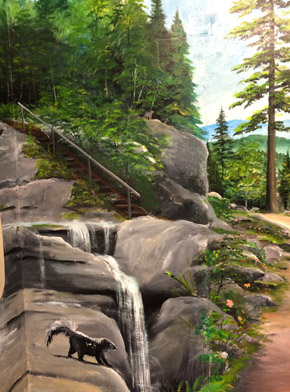 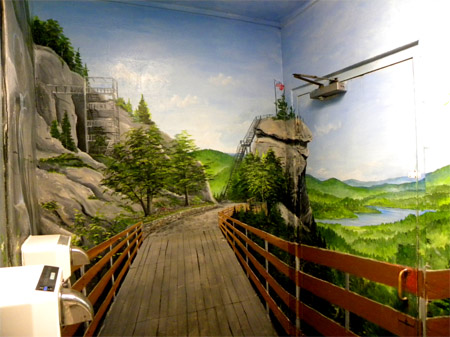 Clive Haynes was born in Atlanta Georgia USA. Has lived in Florida, Japan, England and Italy. Clive has studied Art at Harrow Art Collage and Uxbridge Technical Collage. Received a diploma in Art and Display for Brtish Display Society.

He migrated to North Carolina, USA in 1986 and started painting murals in 1991. He also writing children's songs and books. Some are soon to be published.

The whimsical touches that he adds to his lifelike depictions of people and places make his work even more special. Clive is not only an accomplished artist but a witty storyteller, too.


comment by: Debra
(Falls Church City, VA)
Doreyl,
Thanks for letting me know! What a great project!
It added cool stops to my visit and I love seeing art and the artist was around that day to meet.